When Cowfold Village History Society started thinking about the Centenary of World War One in early 2014, we decided to take a look at the 23 men on the War Memorial in St Peter’s Church who had made the ultimate sacrifice of losing their lives in the Great War. Little did we realise that this was to be the tip of the iceberg for our research. It very quickly became apparent that there had been many others who had served in the armed forces and survived.We had thought that there was no record of these men until by chance we were given a copy of a now lost Roll of Honour that had a once existed in the village. 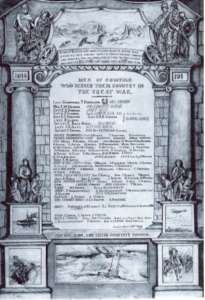 It was titled MEN OF COWFOLD WHO SERVED THEIR COUNTRY IN THE GREAT WAR. Dated 1914 it listed 103 names. It was designed and drawn by R.H.P Quick the headmaster of the village school. The roll is however unfinished. If you look carefully on the top of the right hand column the last numeral is missing i.e 191. We can presume that the Roll was incomplete because on the 1st June 1916 Mr Quick enlisted into the Royal Naval Air Service and, therefore, the men who enlisted after this date were not included.

And so our journey of discovery began to identify those men who had left the village to serve their country with the aim being able to honour all the service men we found and create a lasting record for the village. We have discovered another 35 names to add to the list and have therefore researched 138 men. Our research delved into service records that have survived, talking to descendants and looking at local newspapers from that time. We learnt of great acts of courage, decorated heroes and ordinary men who did their duty, also the soldier who had 22 teeth extracted by order of The War Office and another who died and was buried in a Commonwealth War Grave in St Peter’s Churchyard on the same day as his daughter.

As the project developed we realised that we could not deal with the men in isolation and needed to place them in the context of the village they left behind, their families, lives and destinies.

We held an exhibition, Cowfold and the Great War in 2015, and hope to complete the project to coincide with the 100 year anniversary of the end of fighting in 1918.

We’d very much like to hear from anyone who might be a relative of people who lived in Cowfold at the time of World War One and would love to see any photos or memorabilia from the village at that time. 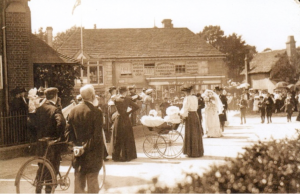 Wedding Party in the centre of the village, 1914