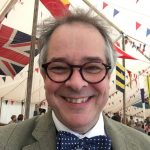 What a great evening we had to celebrate the Society’s Tenth Anniversary in the Village Hall on Friday 22ndFebruary!

Rupert Toovey, a senior director of the Washington-based auctioneers of Fine Art, Antiques and Collectables, Toovey’s, hosted a “Treasures from your Home” event and we were all enthralled by his colourful and authoritative evaluations of the wide range of objects brought by members of the audience, from a WW2 ARP whistle to signed photographs of King George V and Queen Mary in their original metal frames.

He also recounted how he first became involved in auctioneering and his continuing passion for the business was clear as we listened to the spellbinding stories of some of the exciting finds during his 27 year long career.

The discussions continued afterwards as we tucked into a fine spread of tasty nibbles.