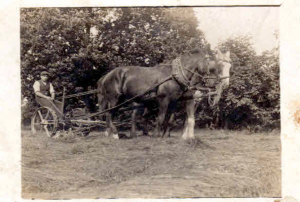 In early times the land around Cowfold appears to have been used mainly for woodland pasture and orchards, although various parks established over the parish may have been used for hunting. Much of the land around Cowfold was owned by six manors, Beeding, Ewhurst, Shermanbury, Streatham, Wallhurst and High Hurst, and each of these had farms in the area; for example Ewhurst Manor had nine farms in including, Baldwins, Brownings, Capons, Cratemans, and Picknowle (now Parkminster); Shermanbury Manor also had nine including Bulls, Eastridge, Homelands, Lidford and Gervaise; Streatham Manor had ten including Cotlands, Potters, Eastlands and Godshill; and Beeding Manor had twelve including Denwood, Drewitts, Drodges (the cottages below Crabtree), Graffield and Singers. 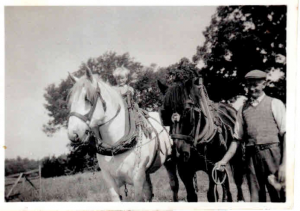 Agriculture and the wealth it generated impacted greatly on the development of Cowfold village including improvements to St Peter’s Church, and the building or extension of some of the houses in Cowfold.

Agricultural work, and its connected occupations including shepherds, sheepshearers and gamekeepers, was the dominant occupation in the area for many centuries; in 1871 for example, agricultural occupations accounted for 40% of employment in the Cowfold area.

Both during WW1 and more particularly during WW2, the threat to Britain’s food supplies posed by the German U-boat campaigns led to the urgent need for Britain to become as self-sufficient as possible and this in turn led to the formation of volunteer groups to work the land in place of the men who were called up, including the Women’s Land Army. In the inter-war years, agriculture became a depressed occupation both in terms of production and wages and this was the case for the farms surrounding Cowfold, including farms such as Willcox Farm in Kent Street, Dragon’s Farm and Crateman’s Farm off the Henfield Road, and Cooper’s Farm south of Longhouse. By 1939 Britain was importing two-thirds of its food including 88% of its wheat consumption. Now there was a concerted drive to plough up land for cereal production with direct controls on the use of land and production imposed by the re-established War Agricultural Committees. The plough had now become a weapon of war and essential to the enormous contribution the Home Front made to the successful outcome of WW2.

Agriculture continued to be the predominant occupation in the area up to the middle of the 20th century when other occupations, including retail and light industry and commuting to work outside the area, increased.

“The History of Coffee Houses” by Norman Berry (of Partridge Green)