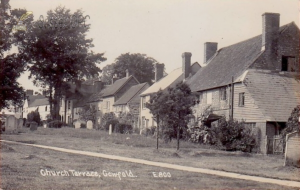 Cowfold has a number of houses with medieval origins that have either been enlarged or retain only parts of the original. Probably the oldest building in Cowfold is Capons, built perhaps in the late 13th century, with additions in the 15th and 16th centuries. A number of houses, including Goodyers, Long House, Wallhurst, Oakendene, Kings, Woldringfold, Parkminster and Gratwicke were the centres of large estates. Four houses stood on the northern boundary of the churchyard in 1635 (along what is now Station Road) of which one, or the site of it, is probably what has been described as “the parish house wherein Thomas Ellis now dwelleth”. This “parish house” may have been the “poor house” or “work house” that was bought by Margaret Norris in 1926, restored and rented to the elderly of the parish, and known as Margaret Cottages.

In the second half of the 18th century the population of Cowfold had started to increase rapidly resulting in the need for more housing to accommodate labourers’ families. Houses and cottages were built on the wide strips of roadside “waste” in the village and parish. For example, Frithlands cottage (now the site of Brooklands in Picts Lane) had been built by 1743 on half an acre of “waste”, and in 1771 Stephen Wood enclosed a “parcel of the waste” to build the house later known as Chates. In the same year Elizabeth Weekes enclosed the ground now occupied by Wood Grange and what used to be the Noah’s Ark café (now the Southern Motors Group garage). A year later Stephen Wood built a house on the roadside strip where Knights bakery used to stand (now a private house) and some time before 1840, further up the street, the Vincent family built Old Steyne House. In addition, by 1840 New Steyne had been built as well as a continuous row of buildings along Church Path bordering the churchyard. Houses now extended up the east side of the Horsham Road (A281) to the top of Brook Hill. Elsewhere in the parish, houses such as Burnt House, Hillsfoot in Burnt House Lane and two buildings on the east side of the road near Parkminster had been built in elongated narrow plots alongside the road A group of houses formed a small community on the Horsham road below the Crabtree by the early 19th century.

In the village, however, many open spaces still remained along the roadside. South of the village, Old Steyne House was on its own while on the other side of the road the only buildings were a small group of cottages where the Hare and Hounds is now; the second pair of these was pulled down in the early 1950s to make way for the pub car park.

The size and layout of the village remained much the same until after the Second World War with the exception of a large number of houses built by Fowlers between the village and Bull’s Bridge on the Henfield Road in the 1920s and 1930s. Then Cowfold was enlarged by the building of council houses in the north-east quadrant of the village such as the Fairfield Cottages estate, and along the Bolney Road, and the development of some private housing estates such as Thornden in the north-west quadrant in the 1950s. Fowlers added a few more houses to those they had built on the Henfield Road. The last significant housing development so far in Cowfold, was the enlargement of the private Oakfield Road estate, including Acorn Avenue, where an initial 12 houses were built in 1985; Acorn Avenue now has around 120 houses. 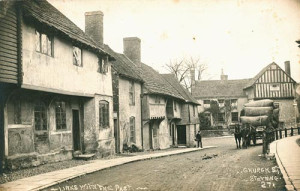