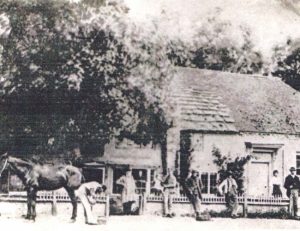 Outside the old Red Lion

In the 19th century, a number of shops provided for Cowfold’s needs. Bacon’s Stores, was a ‘shophouse’ at least as far back as 1765 and in the 19th century was principally associated with Henry Carter, for many years the Assistant Overseer and a leading member of the Cowfold community.   A butcher operated from an old building next door backing onto the churchyard for over twenty years from about 1820. A second butcher’s shop was opened on the opposite side of the street by a William Sendall in the building that was subsequently used as Farren’s motor trade premises. 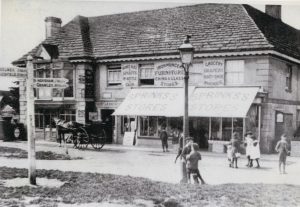 Sprinks Stores in centre of village

The ‘Olde Shoppe’ block which existed in the 17th century, housed another grocer and fruiterer and a shoemaker, besides the butcher, in the mid-19th century. William Sprinks opened a general store in 1887 in the building that was, or was near, Bacon’s Stores and which later became, until recently, the Co-operative stores. Another grocer’s shop (Peacocks) existed to the north of the Red Lion in a building which then occupied the area of the low walled garden in front of Jersey (now Trelawney) Cottage. Both shops sold everything for the villagers’ needs, including groceries, hardware, some clothing, haberdashery, patent medicines, fruit and vegetables, wines, spirits and beer and even furniture. Drapery requirements could also be obtained there as they could later at Sprinks’ Stores. There was another shoemaker’s shop along the West Grinstead road run for thirty years or more from about 1841 by William Sherlock and, after his death, by his wife with the assistance of their family. The location of this business may have been in the premises known as far back as 1790 as the Old Butcher’s Shop.

Importantly for a rural community, the smithy was situated by the churchyard fence on the south side of the lych gate. The village blacksmith was provided by the Leppard family, father, son and probably grandfather before them, for nearly a hundred years after which the business passed to Thomas Leppard’s journeyman assistant, George Sims, on the former’s death in 1865. Other tradesmen included the saddler and harness maker at Old Steyne House, Stephen Fowler’s builders’ yard from about 1853, a dressmaker’s opposite the Old Shop House in the 1850s and a baker nearby.

In 1913 Cowfold had 17 shops and businesses reflecting the village’s self- sustainability, including two butchers (James Goacher and Mary Sendall), two grocers (Sprinks and Peacocks), two bakers (Charles Oliver and Arthur West), two bootmakers (Richard Eade and Edgar Humphries), a hairdresser (Joseph Leisten), a tailor (Edward Skinner) and a dress maker (Miss Elizabeth Eade). This level of retail provision remained fairly constant up to the end of the century despite the increase post Second World War, in out of village chain stores and shopping centres. 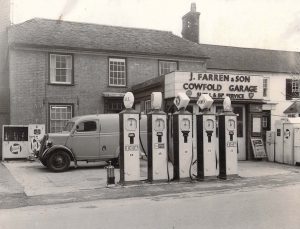 But by the end of the century, the local bakers, butchers, blacksmith, saddler and all but one of the grocery stores had disappeared or been converted into residential accommodation. So too had Bob Farren’s TV rental business (closed in the early 1970s) and then the Farren’s garage (closed at the end of May 1988). To some extent in their place, Oakendene Industrial estate was established in 1980 off the A272 to the east of the village. In the village itself, Fowler Brothers continues to operate from their site near the Hare and Hounds pub, and the Bridge Garage and Southern Motors Group garage remain in business on the A281 near Bull’s Bridge. In all, there are 117 companies operating in the village and nearby including 3 carpenters, 2 garden designers, 2 hairdressers, 2 personal trainers, 2 building maintenance firms, 2 car repairers, 2 nursing homes, 1 restaurant, 2 interior designers, and a toy shop. The Cooperative Stores is the single general food outlet and has very recently relocated from the building that used to be Sprinks’ Stores to the previous Coach House and then Coach and Horses inn (which used to be the Red Lion).