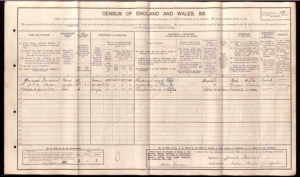 The 1911 census is thought to be one of the most important record sets as it shows family records in detail before the WW1. It was taken on the night of 2nd April 1911. It collected detailed information on the people who spent the night in each household.

In 1911 there were 561 females living in Cowfold. There were an almost identical number of females in each of the age ranges between 6 and 40.

The average life expectancy for females in England in 1911 was 53 years old. In Cowfold 74 women were aged over 50 (13% of the female population), well over the national average, probably explained by the predominantly rural (outdoor) and healthy lifestyle led by the villagers compared to those in the larger industrialised and urbanised parts of England.

The highest number of females was aged between 0 and 6. The next highest was aged between 36 and 40. Cowfold’s female community was therefore predominantly young. 46 women were aged between 61 and 85 (8% of the female population). The oldest female villager was Sarah Baytop, aged 88.

33 females were widows, 191 were married, and 212 were single females over the age of 12 (the legal age of marriage for women in 1911). Single females accounted for nearly 20% of the population.

The oldest female in employment was Sarah Anscombe (aged 80) who is described as “Letting Apartments”. The youngest were Ada Wilson (housemaid), Gladys Weaver (kitchen maid) and Alice Rowell (servant), all aged 14.

Amos and Francis Tidy, who lived at Frithlands, were married the longest at 54 years.

In 1911 there were 509 males living in Cowfold (discounting 65 monks at St Hugh’s Monastery and 17 boarders at Cowfold Grammar School). There were an almost identical number of males in each of the age ranges between 0 and 20 and there were 185 males between those ages (over a third of the total male population). 18 males were over 70 years old and the oldest man in the village, at 91 years old, was Harry Newham, a boarder living on private means at Little Brook.

The average life expectancy for males in England in 1911 was 48 years old. In Cowfold 108 men were over 50 years old (21% of the male population), well over the national average; this suggests that Cowfold men were generally healthier than the national norm and may have to do with the predominantly rural (outdoor) lifestyle.

40 men aged 60 or over were recorded as being in work, a number doing arduous jobs such as labouring or gardening. The oldest man recorded as working was Henry Walder who was 82 and was shown as a wood merchant, living at Bull’s Cottage. The youngest were William Henley (stable boy), and Frank Scutt (farm labourer), both aged 14.

As shown in the ONS graph below, the life expectancy at birth in England and Wales has increased significantly sine 1841 and, in 1911, the rate of increase was relatively high, probably as a result of the reduction in infant mortalities. 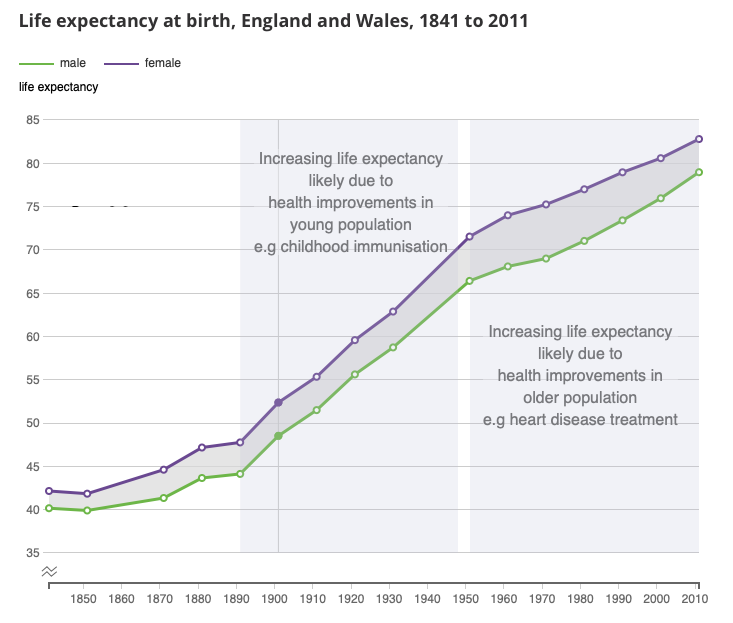 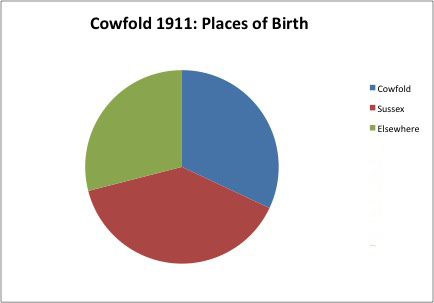 This indicates that, by 1911, Cowfold had moved from being an insular village in the 18th and 19th centuries to one that embraced arrivals from outside who soon became integrated within the village and contributed significantly to its well-being and prosperity. This also suggests that Cowfold was becoming a popular place to live. 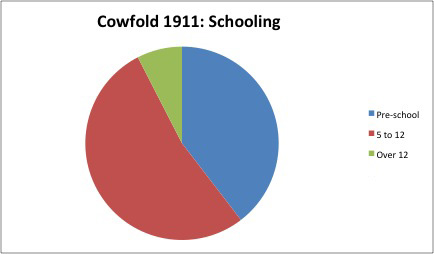 The Education Acts in the last decade of the 19th century made school attendance compulsory between the ages of 5 and 12. The leaving age was subsequently raised to 14 in 1918.

Excluding the Grammar School, there were three teachers – Mr Quick, the headmaster, Mrs Louisa Fowler and Miss Daisy Humphrey. The ratio of teachers to pupils was therefore 1:56 (compared to ratios in 2010 of 1:21 in primary schools and 1: 16 in secondary schools). 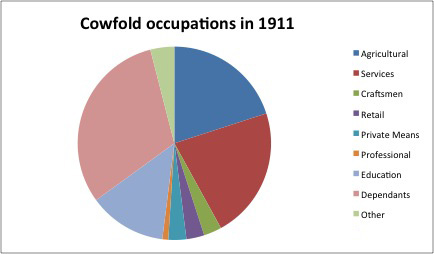 Agricultural sector = 20%. These are people involved with agriculture including farmer’s wives and families, farm workers, and associated work such as bailiffs, farm managers and shepherds.

Private Means = 3%. These are inhabitants who live off accumulated savings or other income and include those living in the “big” houses in the Cowfold area.

Professional = 1%. This category includes doctors/surgeons, the vicar, the policeman, and a ledger clerk.

Education = 13%. This category covers those involved in providing education as well as those receiving it. The 1911 census records 168 children as being at school, excluding 17 at Cowfold Grammar School.

Other = 4%. This category includes general labourers, those working on the roads, coachmen, and grooms.

31% of the population were dependants or were not in employment. This, the largest category, includes children below school age, the wives and elder children of men working in the other categories, except agriculture, where the Census records no occupation, and a few elderly relatives.