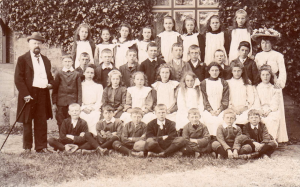 The earliest known record of any form of education in Cowfold was between 1586 and 1587 when licences were granted to curates or readers to allow them to teach. In 1700 a licence was given to a Mr James Bullock who, on 3rd December that year, was paid 10 shillings for providing ten weeks’ writing tuition to the Misses Sarah and Elizabeth Cowper.

Many Cowfold children started work from about twelve, but also had a basic education. A number of schools of varying quality existed in Cowfold from 1813; and children from about 4 years of age upwards are generally recorded as being ‘scholars’ in the census returns of the mid-19th century.

The first main school was built by the vicar, Rev Richard Constable, in 1813 and probably opened in early 1814, on glebe land beside the Horsham road almost opposite the current Brook Farm. This was established as a National School to educate “all the children of all the paupers of the parish and in Upper Beeding in the principles of the established Church”. A William Hart was appointed as school master and was then sent to the Central School at Chichester tuo learn how to teach and to run a school! 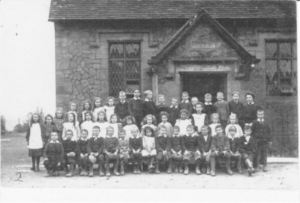 That school probably ceased its activities in the 1870s when a new school was built by Mr Richard Hoper on the site of Potters House across from St Peter’s Church at Potter’s Green; before that Potters seems to have been the venue for a Dame’s school for girls run by a Mrs Richardson. The school became a Church of England school in 1901 and is now St Peter’s School.

By the second decade of the 20th century, St Peter’s was the only educational establishment in the village. It took children between the ages of 5 and 14 and there were around 100 pupils, including, from 1929, a number from Shermanbury after that school closed because of lack of numbers. The headmaster from 1908 to 1949 was the well-remembered Mr. H P Quick, and he was assisted at the beginning by two women teachers, one of whom was Mrs. Fowler (and during the Second World War by three, Miss Fisher (infants), Mrs. Tidy (2nd class) and Mrs. Luxford (3rd class).

In 1909 the school was enlarged by the addition of another classroom and separate lobbies for Boys, Girls and Infants. The school was overseen by six managers, the first of who were: Reverend Maurice Berkley, Col. C. B. Godman, Mr. W. Sprinks, Mrs. Hoper (wife of Richard Hoper who built the school in the 1870s), Dr. W Gravely and a Mr. James King who represented the Parish Council. During the First World War, Mr. Quick served in the Royal Navy Air Service and Mrs. Fowler became Acting Head Mistress until his return.

At the beginning of the Second World War, Cowfold received 175 mothers and children evacuated from London, and a further 101 children from the Christchurch Parish School, Croydon, with their staff. A double shift system had to be put in place, with local children attending mornings for normal school work at St Peter’s and then at the Village Hall in the afternoons, and vice versa for the evacuated children.

In 1952 St Peter’s became a Primary School for children up to 11 years old, following which they went to a secondary school. In 1962, the school was almost completely rebuilt, the only remnant of the old school being the main class room which now became the Assembly Hall. A whole range of new class rooms was added, together with staff rooms, cloakrooms and toilets; an adjoining field was acquired for sports and recreation. Then in 1969, a swimming pool was added, constructed entirely by voluntary labour and in memory of two boys who, in 1968, had drowned trying to help a friend, even though they could not swim themselves, during a trip to the coast.