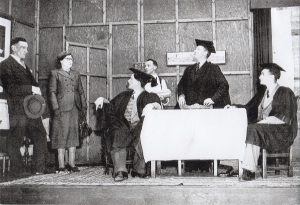 A scene from a play put on by the Dramatic Society in the Village Hall, thought to be in the 1950s

In the 18th and 19th centuries up to 1896, the Red Lion (now the Cooperative Stores) was the main social centre of the village; it was also sometimes the place where the village government was transacted and where the Vestry met between 1807 and 1840. The original Red Lion was reputedly established in the 1650s but was then rebuilt and later remodelled; it formerly contained a fire-back dated 1657. By 1851 James Foice, a carpenter and builder living at the corner of Eastlands Lane, had begun dispensing beer at his cottage and that beer shop eventually became the Hare and Hounds.

The village had a small public reading room built in 1852 and sited on Station Road near the current entrance road to St Peter’s School; this was used by the men of the village to read the available newspapers. After the village hall was built, it continued in use for a number of purposes including bible reading, missionary meetings, parochial church meetings and as Election committee rooms and for rehearsals of the village Players.

The village hall was built by Fowlers and given to the community by F.D. Godman in 1896. It included a reading room, with a lending library and rapidly became a main focus of social life in the village; it continues to be a focal point of Cowfold life today.

Sports played in and around Cowfold included football, stoolball and cricket; a Cowfold cricket team played at a ground at Oakendene from 1721 to 1815. Cowfold Football Club was formed in 1894 and initially joined the Horsham and District Football League. The club continues to thrive, having won the Horsham and District Division 3 shield in the 1934/5 season and then the Division 2 shield before joining the West Sussex League Premiership, which they won for the first time in their history in the 2012/3 season.

In the 1920s through to the end of the 1940s, the village ran a number of clubs specifically set up to provide a means of saving or as an early form of health insurance before the arrival of the National Health Service. A “Tontine” club was operated by the Hare and Hounds which allowed members to save money each week and then at Christmas withdraw those savings with a bonus. The Red Lion and the Village Hall each ran a “Slate Club” where again members could subscribe a fixed amount each week which could then be used as a sickness benefit in the event of illness or an accident. Any surplus was shared out at Christmas.

In addition the village held whist drives often in support of the blind or the Sussex County Cricket club, or a combined whist drive and dance. The various sports clubs also held dances occasionally throughout the year, and there was an “Old Time Dance Club”. The Crawley and Horsham Hunt also held their Hunt Ball in the village on a number of occasions. And the annual Dr. Dicken’s Ball was held in the Village Hall in aid of the Royal Sussex County Hospital where tickets at five shillings a head were eagerly sought after. The Village Hall Club met in the Reading Room, its members drawn from the tradesmen, shop keepers and responsible village citizens. Daily papers and periodicals were available to be read at any time of the day, and in the evening the members played chess, cards or dominoes or sat around the fire chatting. Billiards, pool or snooker were available in the main hall.

In the 1960s a range of social organizations were established, including the Women’s Institute, the Royal British Legion, the Horticultural Society, the Darby and Joan club, and various sporting clubs including cricket, football, stoolball, tennis and darts. Organizations such as the Women’s Institute and the Royal British Legion continue today to which are added Scouts, Girl Guides and Brownies, a Bridge club, a History Society, dog training classes, a playgroup and a Village Social Committee that among other things organises the annual Cowfold Festival. 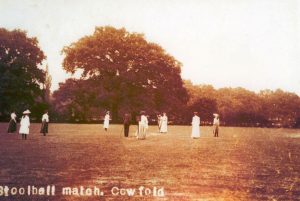