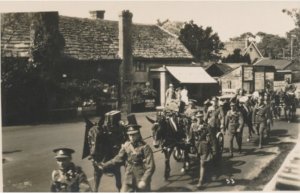 Troops moving through the village in 1914 (photo from Di Holman)

The First World War was one of the most cataclysmic events of the 20th century, claiming almost a million British lives and having significant social, political and economic consequences. Virtually all English communities were affected and Cowfold was no exception.

In excess of 138 men left the village in the defence of their country. Our research delved into the service records that have survived, talked to descendants and looked at local newspapers from that time. We learnt of great acts of courage, decorated heroes and ordinary men who did their duty, their lives, service records and families.

More information on the Society’s project on the impact of World War I on Cowfold is here.